This is part of my series on Understanding How Music Works. If you haven’t yet, you may wish to start at the beginning. Here, I discuss a certain perceptual phenomenon that occurs, to the best of my knowledge, in all humans with normal hearing. This phenomenon has profound implications for how music works. But first, a definition…

We humans seem to perceive regular cycles of compressions of air, happening at a certain range of amplitudes and frequencies, as a “pitch” or a “note.” Translation: when something pushes the air molecules tight together, then apart, then together et cetera, not too much and not too little, at a regular pace that’s not too fast and not too slow (let’s say 200 times per second for an example), we hear that as a steady, even sound that doesn’t seem to “move” up or down; that’s what we’re calling a “pitch” or “note.”

Let’s listen to a couple of notes: first this one, then this one. What I hope you’ll notice about this is something quite deeply weird, but something that musicians take for granted: the two notes are somehow “the same,” but in another sense they are also clearly “different.” If you didn’t notice that before I pointed it out, listen again to see if you can’t hear what I mean.

I don’t want to belabor this point; it’s so fundamental that people with any familiarity with music-making don’t dwell on it. But since it forms the basis for so many of the other assumptions and models that we make/use about music, it deserves a moment of our attention. And it needs a couple of jargon words, so that we can talk about this phenomenon more easily.

First, how are they different? By convention, we refer to the second one as being “higher” than the first. (Again, this is a label that comes so naturally to even beginner music-makers that most think that “higher” or “up” is inherent in it, but there are cases that suggest that even this is a cultural, learned label. Let’s go ahead and adopt it now.) We refer to the second one as being one “octave” above the first. (The term “octave,” since we’ve temporarily thrown out ABCDEFG, could be considered something of a misnomer. It arises from the assumption that it is “eight notes” (whatever that will mean) above the initial note. Let’s notice that potential for confusion, and grandfather it in anyways.)

Then, how are they the same? A music-maker will say “they’re the same note, they’re just an octave apart.” But they are clearly not “the same” note, even though there is something undeniably similar about them. They seem to be similar in type, somehow. Let’s call that similarity “pitch class,” as others have done.

Since “pitch class” may be a new term for you, I’ll illustrate. There are ways to visualize and represent the kind of relationship different notes seem to have with one another.

Say there’s a 9-story parking garage that (oddly) is perfectly circular, and has a smooth circular ramp spiraling all the way up the outside of it. Nine vans, each with five people in it, drive up the ramp until each is at a different level, and stop at the northernmost point of the circle. One person, wearing a red shirt with the name “Doug” on it, gets out of each van and stands looking up and down the stories at the other Dougs. The vans drive on, 20% of the way around the circle, and there stop again to drop off nine people wearing yellow “Ray” shirts. This repeats until they’ve dropped off 9 people with green “Mimi” shirts, 9 with blue “Saul” shirts, and finally 9 drivers with purple “Laura” shirts. 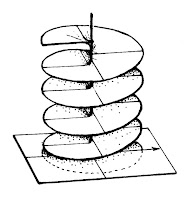 That’s how different notes work. We’ve only got the space around the circle—between Doug and the next Doug—to put notes (people) in. We could put 4 people (notes) between each Doug, as we’ve done, or 6, or 11, or any number—there are an infinite number of points around the circle—but at some point, it’s going to get crowded. And the notes (people) don’t actually need to be evenly spaced around the circle—in practice, they usually aren’t (which is interesting in itself)—but the other people (notes) with the same name are always directly above/below each other.

So, we say that all the Dougs are in the “pitch class” Doug, and all the Rays are in the Ray pitch class, et cetera. This holds true whether we label the pitches with numbers, letters, letters modified with a some kind of modifier (like a “sharp” or a “flat”), or nonsense syllables like Do, Re, Mi, Sol, and La.

Perhaps this explains why musicians have a reputation for having good spatial reasoning. People with practice playing with the relationships between notes may have something like a model in their head that looks a little bit like Doug’s Garage. Perhaps.

But I think that’s quite enough for now! Next time, I believe it’s time to go into the relationships between notes/pitches, when we see that happen in a song has more than one note in it.

…as is sometimes the case.